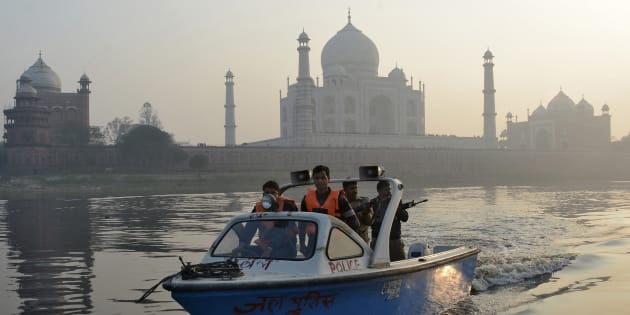 One feels for Uttar Pradesh tourism minister Reeta Bahuguna Joshi. She had to appear before television cameras and respond to her party colleague BJP MLA Sangeet Som’s statement that the Taj Mahal was built by “traitors” and is a “blot on Indian culture.”

Som’s statement resulted in an expected uproar. One messes with India’s most famous monument only when one is particularly foolish or particularly hungry for media attention.

Som was being ridiculous. Even if he did not like the man who built it, it does not change its architectural legacy. What’s even more ridiculous was Som exposed not just his bigotry, but also his tenuous knowledge of history. He said the TaJ Mahal had been built by a man who imprisoned his father. Every school child in India knows it was built by a man who was imprisoned by his son.

Every school child in India knows it was built by a man who was imprisoned by his son.

But Som said something that was far more ominous than his swipe at India’s most famous monument. He said, “If these people are part of our history, then it is very sad, and we will change this history.”

Som is a man who knows a thing or two about changing the inconvenient facts of history. One of the great anti-beef crusaders, he was left red-faced when newspapers like The Hindu revealed that he had been the director of Al-Dua, a company that prides itself in the “export of quality buffalo, sheep/lamb, goat meat and hides.” At that time asked why he had given an unsecured loan to Al-Dua, Som had angrily said he did not know about the business. He was just investing in land. And anyway, that was from before he joined politics.

But when Som says “we will change this history” he is tapping into something more insidious. Changing history has become a favourite political project these days. Sometimes it’s as easy as changing a street name as happened with Aurangzeb Road in Delhi. Sometimes it’s a more long-term project. Playwright Soibal Dasgupta spent time with the RSS under a pseudonym last year. He tells The Telegraph he was “curious about how they brainwash children in their schools with their ideas of Hinduism and Indian history.” He said he had once taken part in a play where a minister talks about Ganesha as an example of the world’s first head transplant and calls the Qutb Minar the Vishnu Stambh. He remembers the audience laughing uproariously but then he found out that distortions like that had been included in textbooks in some RSS-affiliated schools.

When Som says “we will change this history” he is tapping into something more insidious.

And as casually as that, it can become fact. If you search Qutb Minar and Vishnu Stambh, Google yields over 6,000 results. If you search Taj Mahal and Hindu temple, it yields 11,70,000. The Archaeological Survey of India had to go to court to rebut claims that it was really a Hindu temple called Tejo Mahalaya, a story that has gained traction ever since PN Oak proposed it in a book in 1989. Oak went to court too to press his claim. In 2000, the Supreme Court dismissed it as a “bee in his bonnet”.

But the bees are buzzing a lot louder these days, stinging harder and being taken a lot more seriously. Oak, a writer who also fought with the INA, was at best an eccentric fringe figure who thought that not just the Taj Mahal but also Westminster Abbey and the Vatican were once Shiva temples. But Sangeet Som is an elected MLA, an office-bearer of the party. He has power to validate an Oak. If Oak had been alive today, he would have surely found much more favour with the likes of Som in charge. He has been described as a “historian much respected by the Sangh Parivar”.

If Oak had been alive today, he would have surely found much more favour with the likes of Som in charge.

That’s why Reeta Bahuguna Joshi’s response to Sangeet Som is telling. She does not criticise him. She does not reprimand him. She hands him the face-saving excuse of “individual opinion”. She gently distances herself from him. What can she do? Her state’s chief minister Yogi Adityanath is not exactly a Taj champion himself. He had once commented the monument had “no connection with India’s culture or heritage”. That was in context of the practice of gifting dignitaries with little replicas of the Taj Mahal. That was fair enough. India has many splendid monuments and there’s no reason our gifts to foreign visitors should not reflect that rich diversity. There’s no reason it should be limited to those fairly tacky little mini Taj Mahals as if that was the only thing India had to offer. But to say the Taj does not reflect India’s heritage is simply a blatant act of rewriting history.

“The current state government is not supporting Agra as a tourist destination because of its Mughal monuments,” Rajiv Saxena, secretary of the Tourism Guild of Agra, a trade association tells the Washington Post.”Their focus is on religious tourism.”

India has many splendid monuments and there’s no reason our gifts to foreign visitors should not reflect that rich diversity.

What Adityanath and Som do not get is that taking pride in the Gorakhpur temple can co-exist with pride in the Taj Mahal too. One does not have to come at the expense of the other. If Reeta Bahuguna Joshi had the courage to say that, it would have meant something. Instead she just gave a bland boilerplate statement.

“We are committed to the upliftment of Agra and Taj. From a tourist’s point of view, we are proud of the Taj Mahal,” said Joshi. It’s not the most rousing defence of the famous monument, but at least someone from a party obsessed with the sacred cow understands the importance of a cash cow!

In the Game of Thrones: An International Conference there will be discussions about various aspects of the show – story plots, fan theories and literary allusions etc. {$excerpt:n} Source: First post Entertainment

India has a “serious” hunger problem and ranks 100th out of 119 countries on the global hunger index – behind North Korea, Bangladesh and Iraq but ahead of Pakistan, according to a report. The country’s serious hunger level is driven by high child malnutrition and underlines need for stronger commitment to the social sector, the […]

Remembering A Subdued Diwali, And Those Who Shared Love To  Light Up Our Dark Night

In my home, Diwali is a festival that is celebrated with gusto. I am not a very ‘festival person’, and generally I like to witness the festivities and associated toil from a distance, but not for Diwali. From cleaning, cooking, decorating, diyas, buying new ethnic wear, to a proper Lakshmi pooja, Diwali signifies lights, happiness, […]